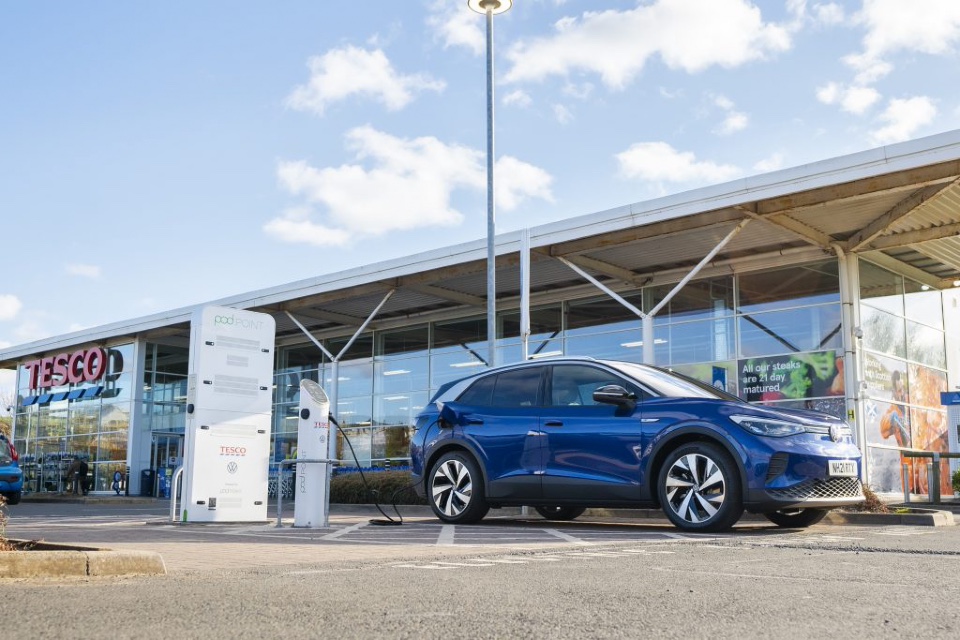 Tesco, in partnership with Volkswagen and Pod Point, is installing free charging points at 600 supermarkets around the UK as part of their commitment to improving electric car charging infrastructure.

The partnership has now provided its 500,000th free top-up – and during this period the company says 3 million kWh of free, carbon neutral electricity has been given out – enough power to drive an all-electric Volkswagen ID.4 SUV around 10.4 million miles.

Based on the average new petrol or diesel car sold in the UK, the scheme has reduced carbon emissions by approximately 2,120 tonnes – the same as more than 2,770 acres of forest will manage in a year.

The announcement was welcomed by Transport Secretary and EV owner Grant Shapps, who said: “As we accelerate towards a cleaner and greener transport future, it’s great to see one of Britain’s most iconic household names leading the way with electric vehicle chargepoints.

“In the time it takes to pick up the groceries, drivers up and down the country can now quickly and easily charge their cars and with £2.5bn of government support to encourage their take-up, there has never been a better time to switch to an EV.”

The Tesco Extra in Slough has been the busiest supermarket for free charging – with the sockets used more than 10,000 times.

It finished ahead of Tesco supermarkets in Stourbridge, Crawley, Altrincham and Bromley by Bow in the top five.

Making up the rest of the top 10 were the Tesco supermarkets in Watford, Orpington, Elmers End, Havant and Lichfield.

Director of Volkswagen, Andrew Savvas, said: “Our partnership with Tesco and Pod Point emphasises our commitment to carbon neutral mobility for all and we’re delighted to have reached this milestone – helping owners of all electric car brands top up with free renewable energy while they’re doing their grocery shop.”

Tony Hoggett, chief operating officer at Tesco, said: “We are committed to reducing carbon emissions in all our operations and aim to be carbon neutral in the UK 2035.

“As part of this we want to encourage our customers to play their part with the rollout of free-to-use EV chargers to 600 of our stores.

“Providing customers with charging points offers them a sustainable choice and giving them the opportunity to charge their car for free while they shop is a little help to make this easier.”

The partnership, which has been running for two years, was announced to improve the charging infrastructure as the UK prepares for an electric future.

According to the Society of Motor Manufacturers and Traders, 108,205 battery electric vehicles were registered in the UK in 2020, an increase of 185 per cent on 2019.

Erik Fairbairn, Pod Point Founder and CEO, added:  “Reaching the 500,000 charges milestone is testament to the growing appetite for EVs as well as the ease and convenience of the charging experience.

“The partnership is making great strides towards our goal of delivering the nation’s largest retail EV charging network – one that is reliable, accessible, secure and free making it even easier for drivers to choose electric and accelerate adoption.

“We look forward to powering up even more local areas as we continue our roll out.”